One of the main concerns nowadays; present in every political agenda around the globe is the issue of climate change and the harmful effects it could have on citizens’ everyday life. The fact that certain cities as Beijing or New Delhi, which have strong manufacturing industries linked to international firms and external consumer demand, has put many political activists against globalization, arguing that this new trend has caused climate change to develop at a pace never seen before, while objecting that these problems could be solved locally, by bringing back national industries and reducing the size of decentralized international production chains. However, all these arguments against globalization in matter of climate change are an outstanding fallacy.

To be able to break down their argument, we will first need to understand its roots. Environmentalists (not all of them) argue that globalization has led to an increase in global demand and consumption levels, which has devastated resources all around the world, to be able to cope with consumers’ wants. This devastation of resources at the same time; they argue, has been followed by the depletion of forests and oceans. We need to be aware, before believing all these arguments, that the issue of globalization and climate change increasing their pace at the same time doesn’t necessarily mean they have any correlation, as climate change has many cumulative effects that could come from past decades when production, transport or heating were much less energetically efficient and depleted a larger number of resources. Globalization has provided firms with a larger network of investors, suppliers and customers, bringing forward the opportunity of adopting much more productive machinery, strategies and even employees, by diversifying on an international level. Apart from looking at it from the side of costs, for which globalization has been pretty beneficial for firms, this greater efficiency of production, has reduced gas emissions into the atmosphere astronomically. This fact can be proved by looking at international statistics, which prove that nations with very high productivity and innovation rates, as is the USA were the ones which reduced the most the annual emissions of CO2, as was the case of North America, dropping its gas emissions by more than 40 million tons in 2017. 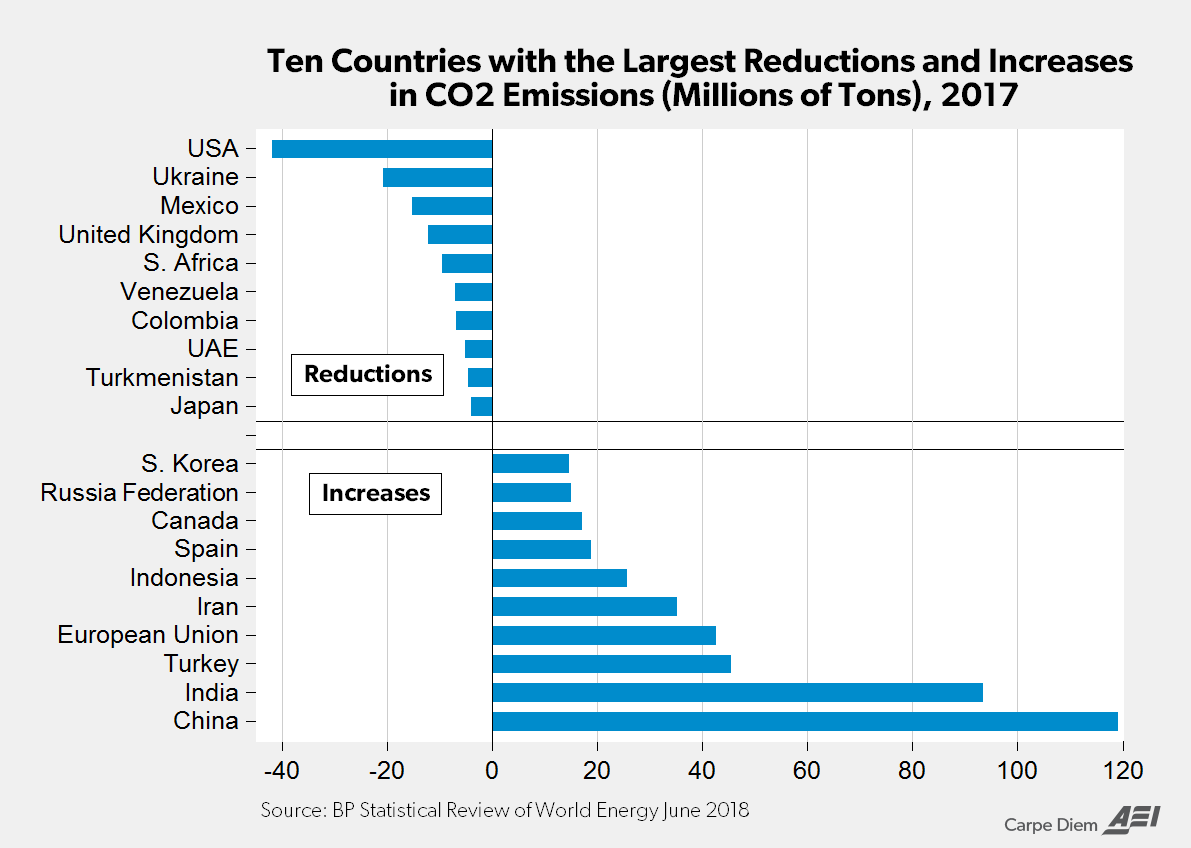 Amid actual political trends, deglobalization or protectionism are much more harmful political ideologies or movements in terms of climate change, than that of globalism and international cooperation and competition. Just imagine the typical national manufacturing industry from the 70s or 80s… where they efficient? Weren’t they very pollutant? Well if we don’t want that to return, we should be aware that greater international integration is the unique solution to our problem. Uncertainty involved in the development of several free trade agreements as NAFTA could result in greater tariffs for certain goods as vehicles, steel and aluminium, which will probably make production and distribution return to their countries of origin, which will probably result in once again, lower productivity, stagnation and pollution. Just have a look at China, a historically protectionist country, with a paternalistic economy, which subsidizes inefficient industries just for their mere survival. Well, it is the most polluting nation in the world. Those are the results of protectionism.

On the other hand, the pernicious effects of globalization on the environment are supported by the “Race to the Bottom Hypothesis”, which argues that (as we have heard many times) the social benefits obtained from globalization are outweighed by the environmental destruction it causes, in terms of pollution and depletion of resources. In my opinion, this school of thought is not even close to being right, as developing countries which have embraced globalization and opened up their economies, were the ones able to reduce most their gas emissions, and even started a process of reforestation, when they surpassed the threshold of $4,500 of GDP per capita. This could be attached to the theory of time preference which is related to the thinking of the Austrian School of economics and marginalist economists. In other words, we have some basic necessities, as nourishment our clothing, which need to be covered in the nearest possible time, but after having covered our basic needs and acquainted a decent standard of living, households start to save some of their earnings for the future- as well as firms- which are later on invested in capital goods, consequently increasing productivity and efficiency. Several projects of reforestation are a clear example of a low time preference, by choosing to invest today in developing resources for tomorrows world.

Other of the things the environmentalist school of thought doesn’t consider is that globalization creates global competition, which boosts economic activity and promotes investment diversification, which triggers environmentally friendly innovations, mostly technological, which are easily transferred from one country to another. We just have to observe the recent development of renewable energies, all of them developed by the private sector through international production chains. On top of it, globalization doesn’t represent just the movement of goods and services around the world, but also the transfer of information, capital and technology which support innovation and environmentally-friendly technologies. Evidence about this can be found in the academic journal Science Direct which provides data in a report about how multinational and large enterprises employ much cleaner methods of production and distribution than their local homologues. This data doesn’t come in vain, as they also refer to how globalization, by allowing specialization for nations on certain sectors where they have a natural competitive advantage, creates a much more efficient allocation of resources and a much more equal redistribution of these around the globe, reducing resource depletion and waste.

Finally, globalization has permitted public awareness about environmental standards to develop through the creation of several international trade organizations as the World Trade Organization or the World Bank, which has resulted in consumer preference shifting towards more ecological goods. The fact that ecological goods are nowadays on sale on the market is also a fact of globalization, as without the existing volume of international trade, the range of consumer goods and services available will be much more limited, and domestic goods won’t probably satisfy everybody’s needs and wants.

To conclude, attacking globalization will just lead to greater protectionism and isolation, making nations less likely to have an efficient and clean production, due to a lack of technological innovation or at least, rising the costs of it. Demanding environmental responsibility and accountability doesn’t mean that direct government intervention in the issue is necessary. Unfettered international cooperation and competition will be more than enough to make climate change turn around.